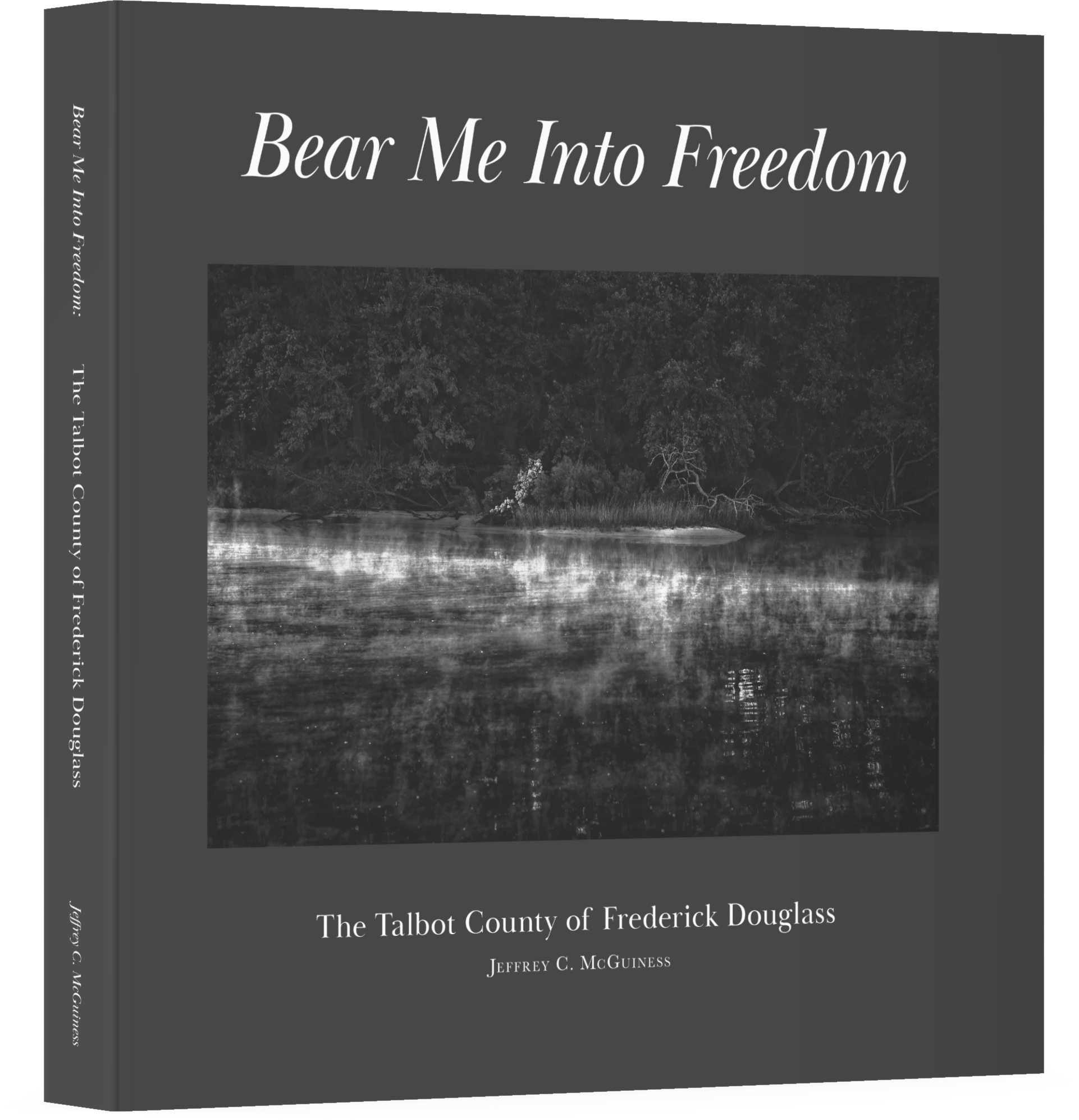 Visualizing the land of Frederick Douglass’s youth, the source of his powerful narrative

Bear Me Into Freedom

The Talbot County of Frederick Douglass

To fully understand Frederick Douglass, it is essential to have a pictorial sense of the unusual place that gave rise to one of America’s most consequential figures.Read more...

This product is out of stock.
Product is not available in this quantity.
look inside
title
Bear Me Into Freedom: The Talbot County of Frederick Douglass
author
Jeffrey C. McGuiness
publisher
St. Michaels Museum at St. Mary’s Square,
St. Michaels, MD
Language
English
Softcover
284 pages
ISBN
979-8-218-03167-1
Library of Congress Control Number
2022912131
Publication Date
November 1, 2022
Weight
3.1 lbs
dimensions
10 by 10.25 by 0.75 in

About the Book
‍

Frederick Douglass is an iconic figure in American history—a powerful writer, stirring orator, and revolutionary philosopher. He was a crusading figure in the fight to abolish enslavement, establish emancipation, and promote justice and civil rights.

The story of Frederick Douglass is inextricably linked with Talbot County on Maryland’s Eastern Shore. It is the place where he was born into slavery in 1818 and spent eleven of the first twenty years of his life before seeking his freedom in New England. Douglass detailed his Talbot experiences with astonishing precision in his three autobiographies, experiences that became the foundation of the most powerful slave narrative in American literature.

The county, half water and half land, is like no other in America. Riddled with streams, creeks, rivers, and bays, its unique geography was the source of his fervent belief that Talbot’s waters would one day bear him into freedom.

There are dozens, if not hundreds, of Frederick Douglass books with hundreds of thousands of words describing his time in Talbot. Bear Me Into Freedom is the first attempt to marry imagery with Douglass's words to picture what Talbot County may have looked like when Frederick Douglass lived there two centuries ago.

This product is out of stock.
Product is not available in this quantity.
Look Inside 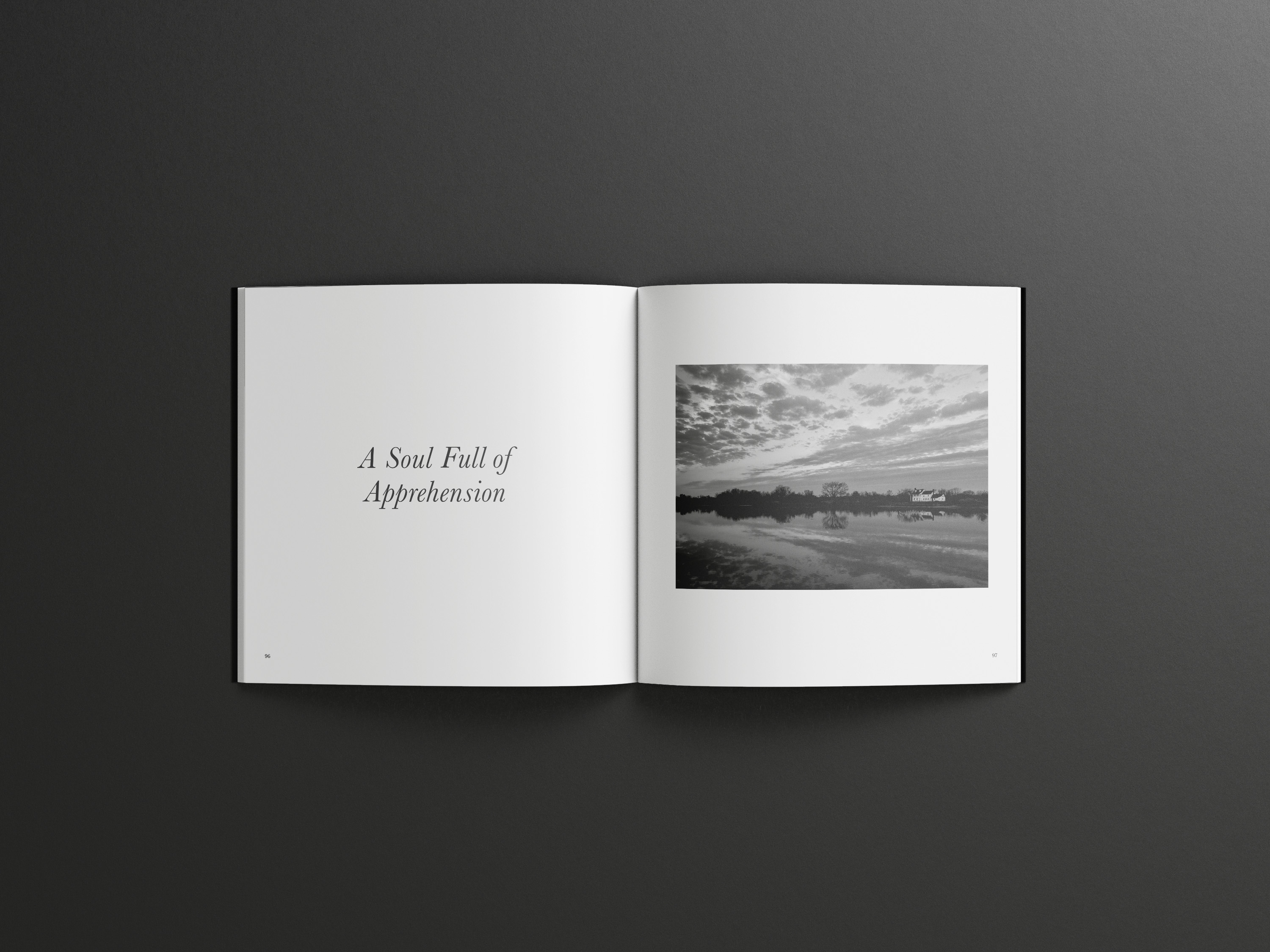 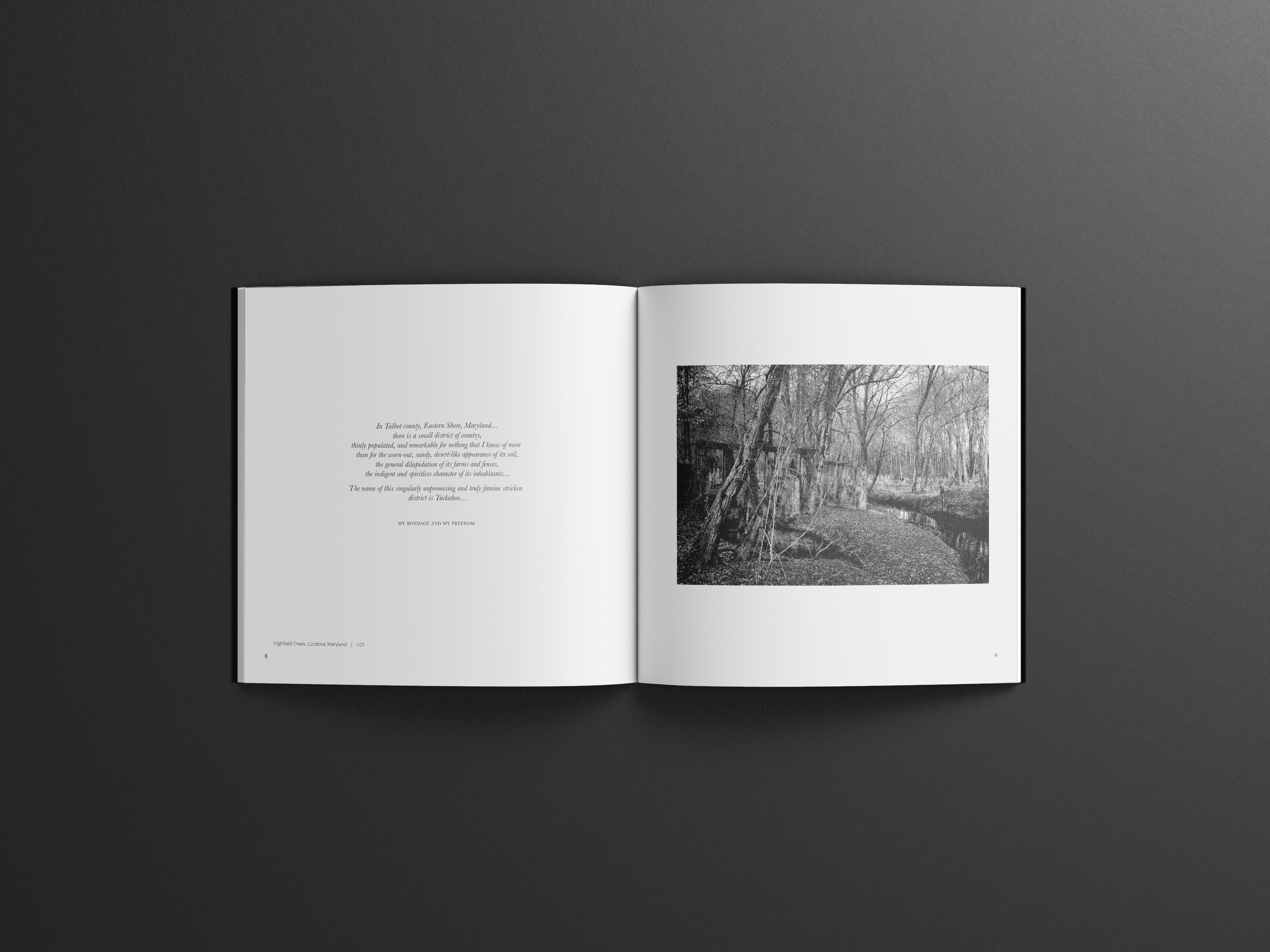 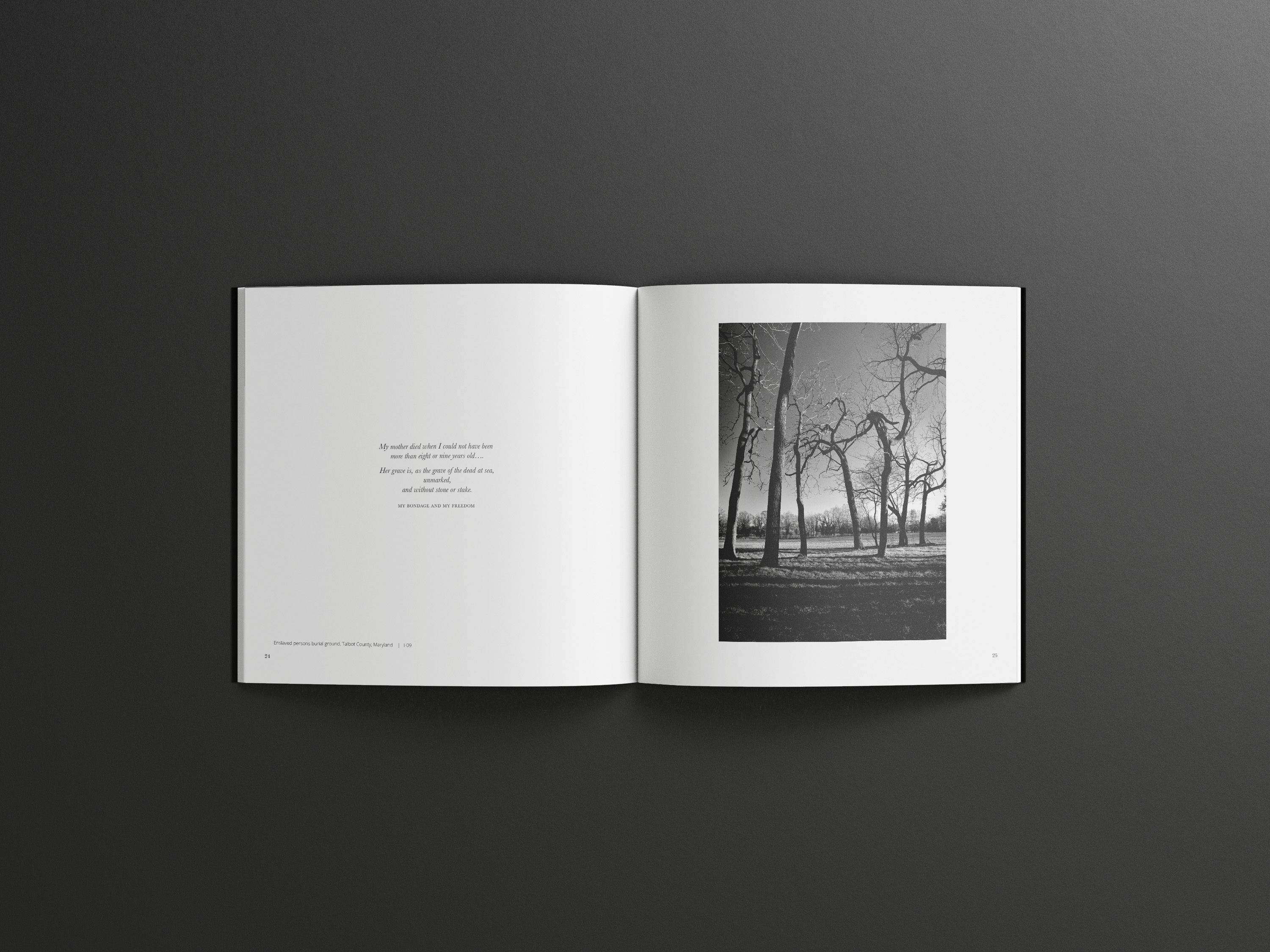 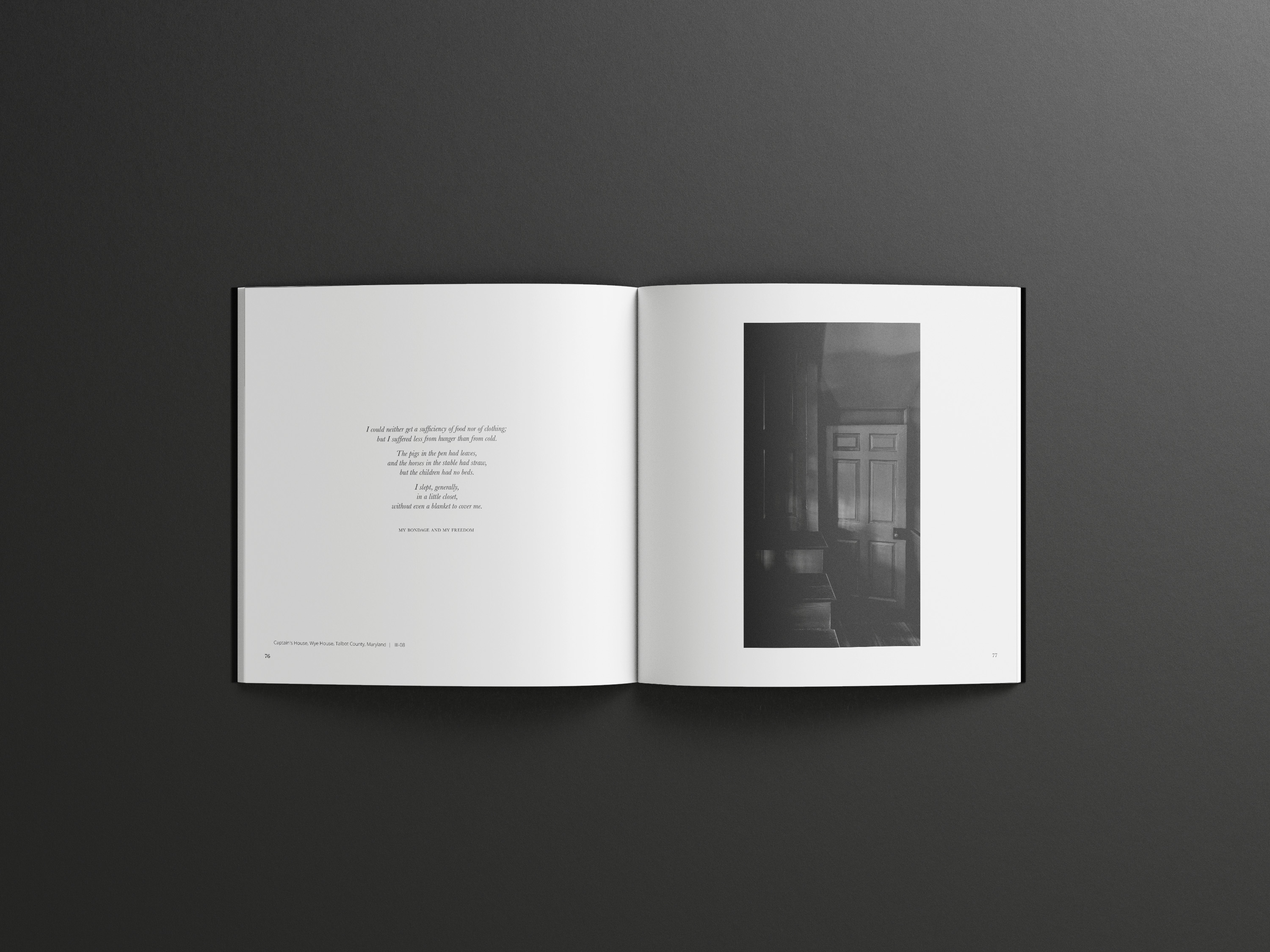 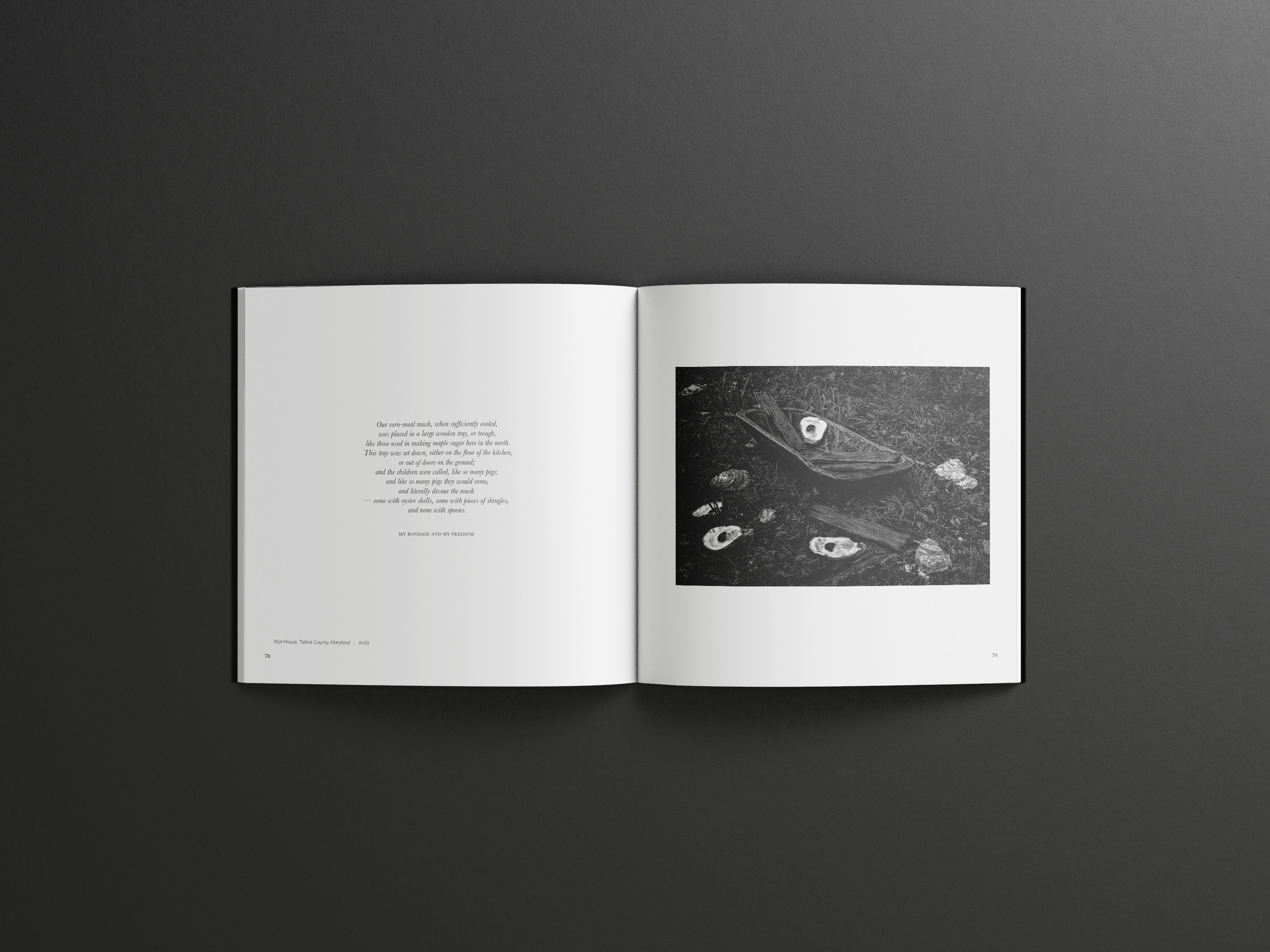 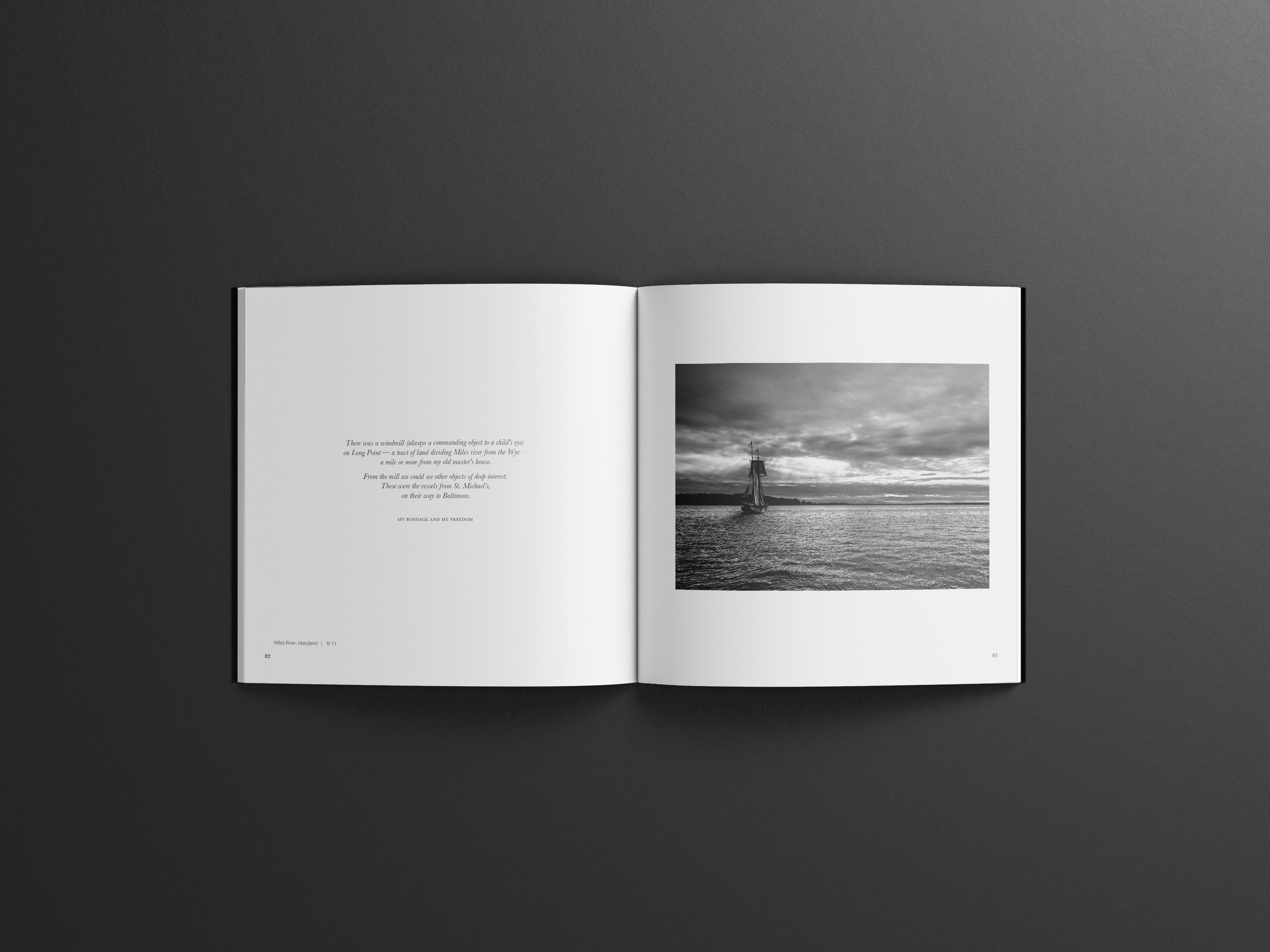 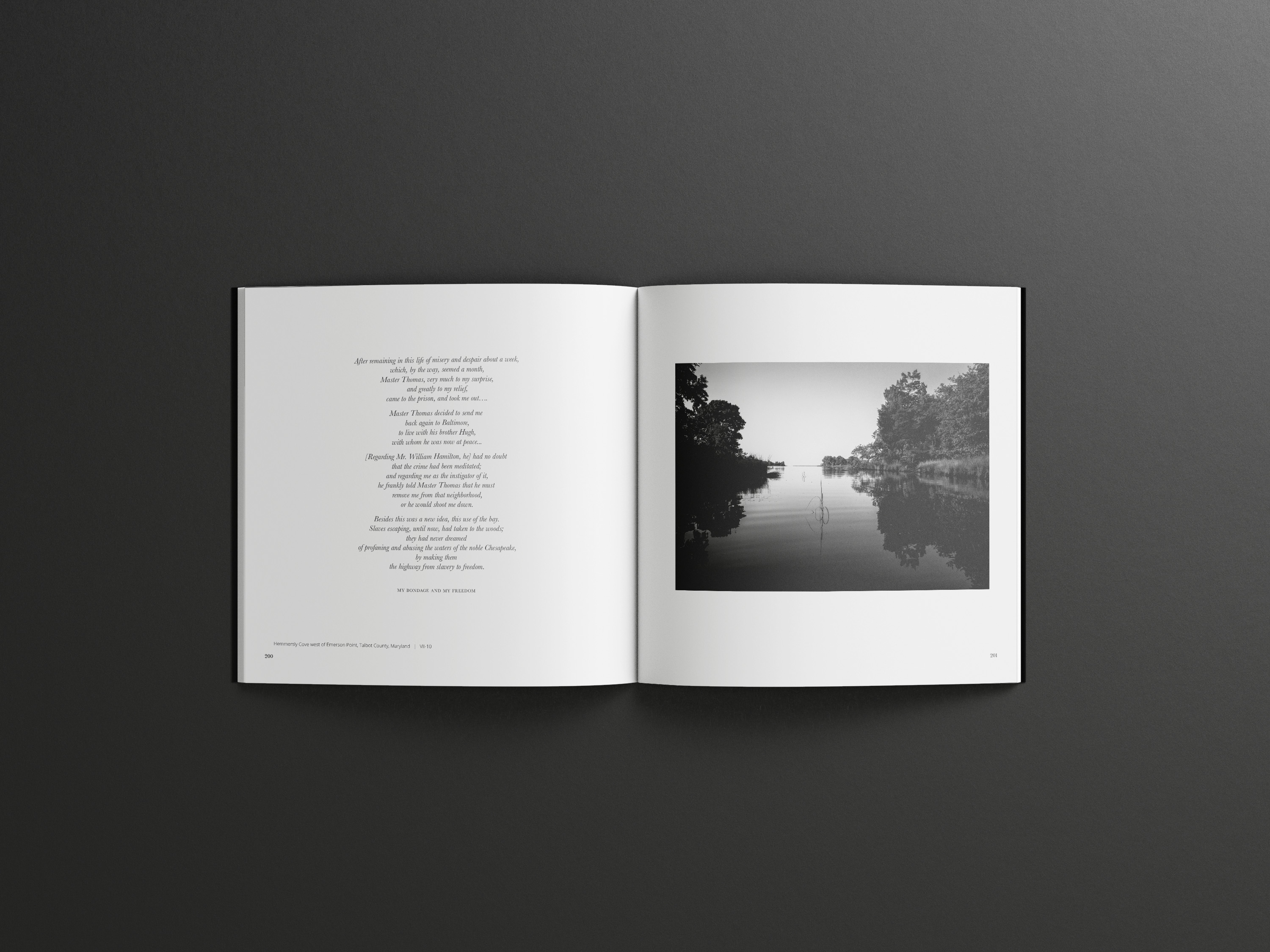 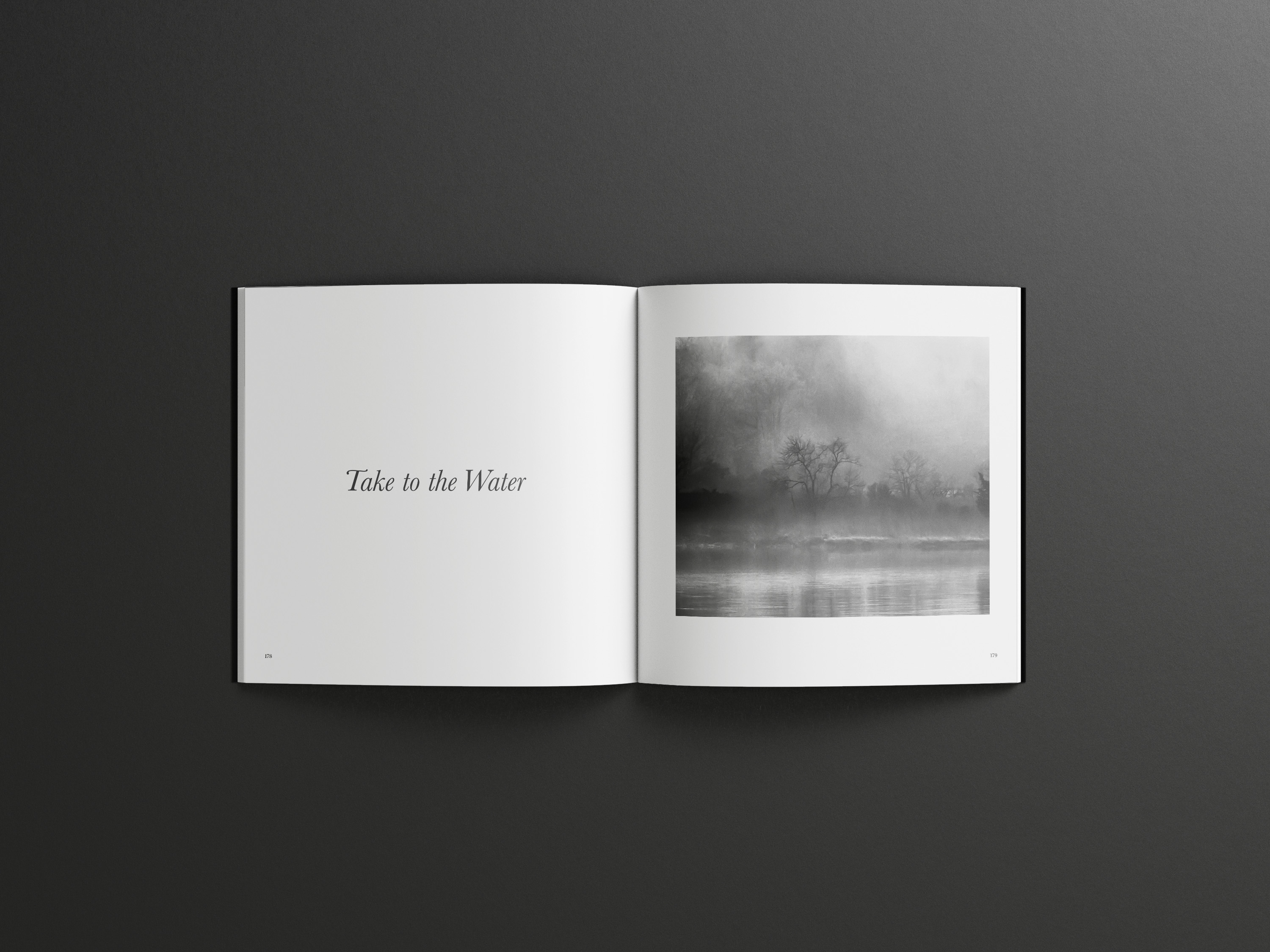 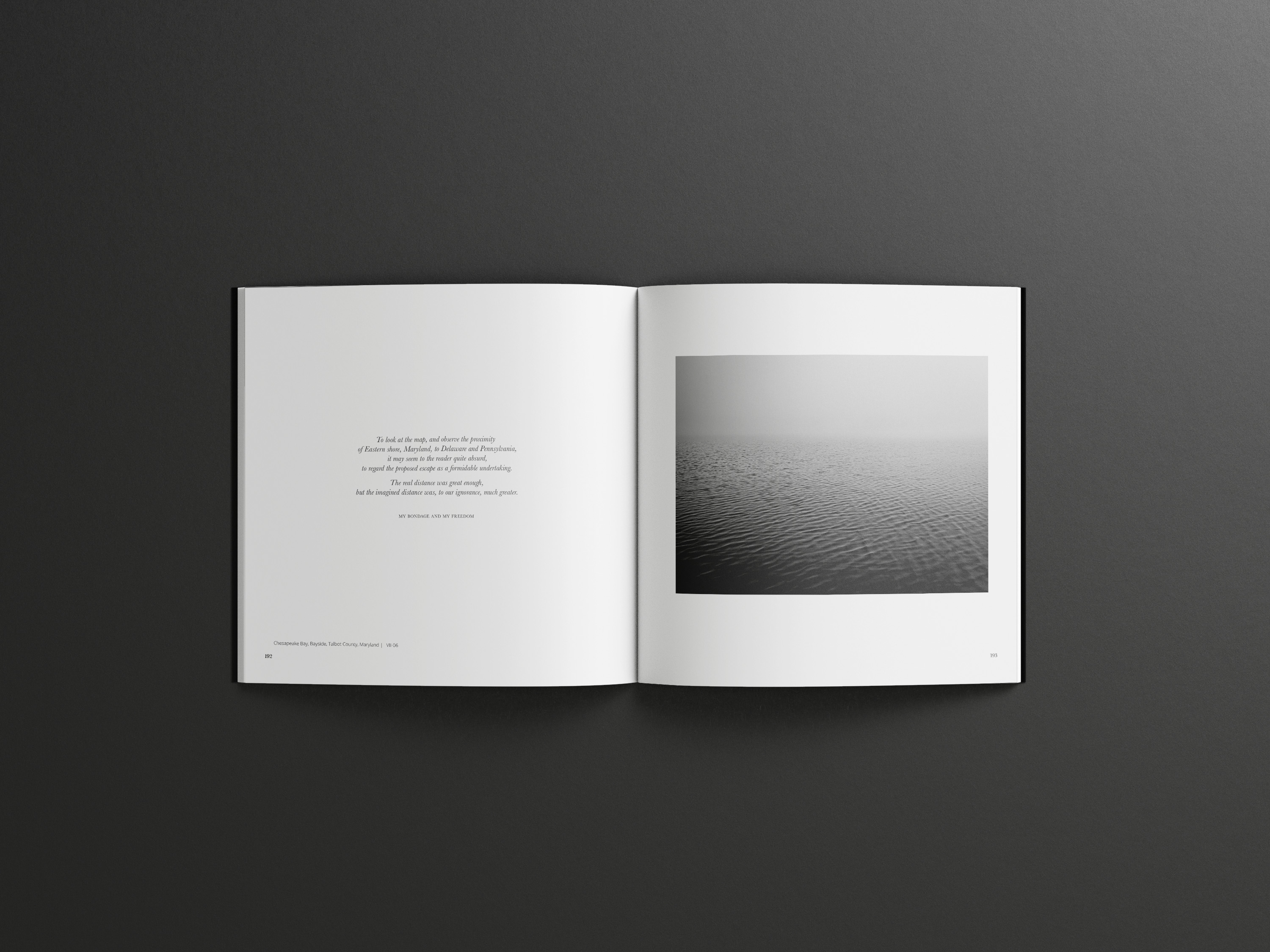 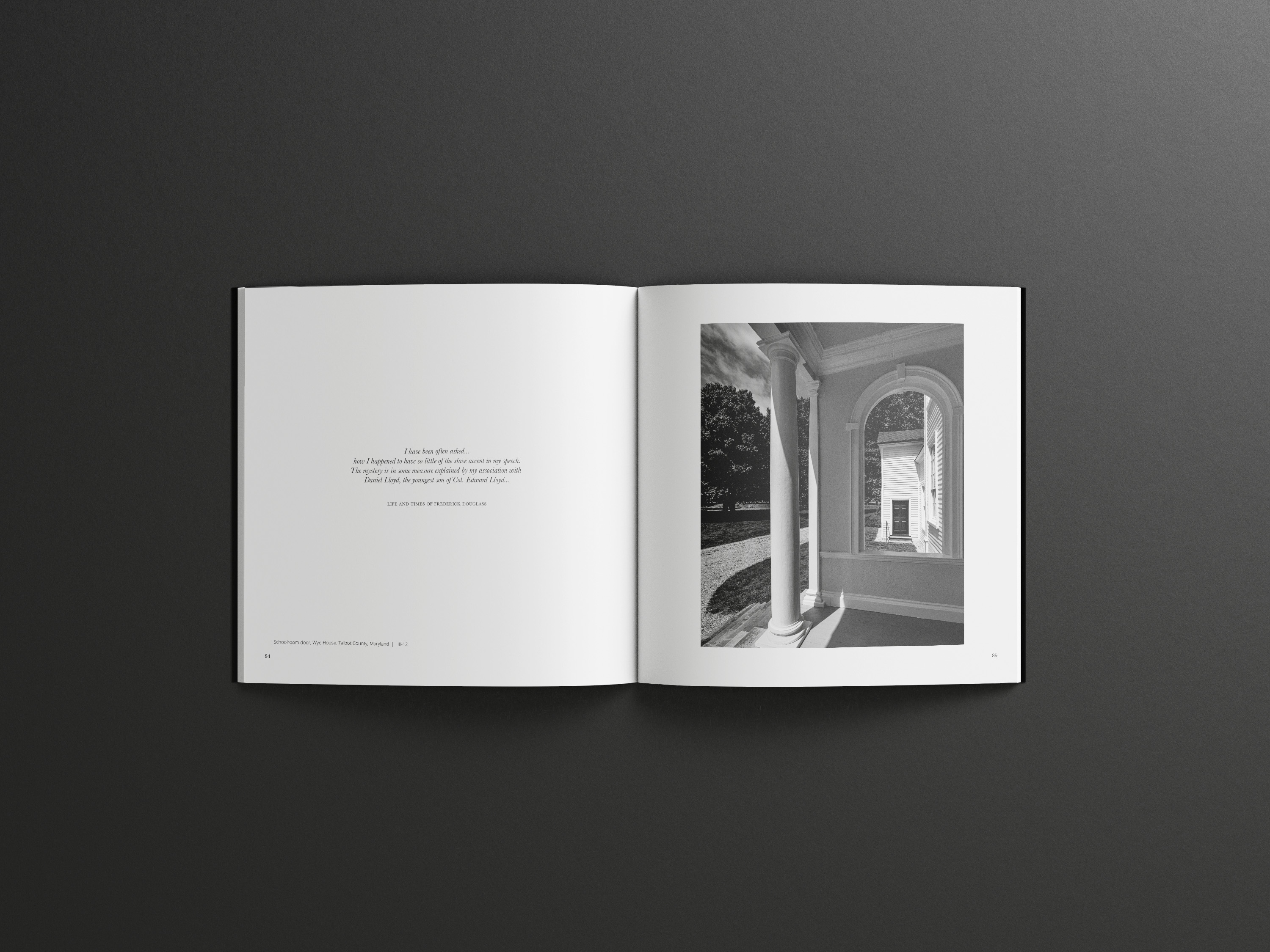 Bear Me Into Freedom by Jeffrey C. McGuiness is a monument and memorial to the world experienced by 'Frederick Bailey, the slave' and remembered and relived by Frederick Douglass 'the free man.' An inspirational photographer, McGuiness' powerful pictures recreate, reimagine, and remember the rivers, the woods, the fields, the buildings, and the towns where Frederick Douglass lived, imagined, philosophized, protested, resisted, and warred by any and every means necessary against the 'hottest hell of unending slavery.' Bear Me Into Freedom is a powerful testament to Frederick Douglass's lifelong conviction: "a picture is a power."

Author of If I Survive: Frederick Douglass and Family in the Walter O. Evans Collection and Picturing Frederick Douglass: An Illustrated Biography of the Nineteenth Century's Most Photographed American
REad Full review
Next

Jeff McGuiness's book offers an invaluable window into the early years of one of America's towering figures. It speaks to the ongoing presence of Frederick Douglass in the landscape of his early life--the brooding beauty of those places where Douglass dreamed, yearned and suffered as a boy and young man. Through his stunning photographs, McGuiness pays homage to the primacy of place in our national memory. This book is a lasting testament to Douglass and the rivers, fields and forests that did so much to form him. It calls for us to honor his greatness by honoring the very land that he was forced to flee.
‍Read more...

author of the forthcoming memoir, American Ramble: A Walk of Memory and Renewal
REad Full review
Next 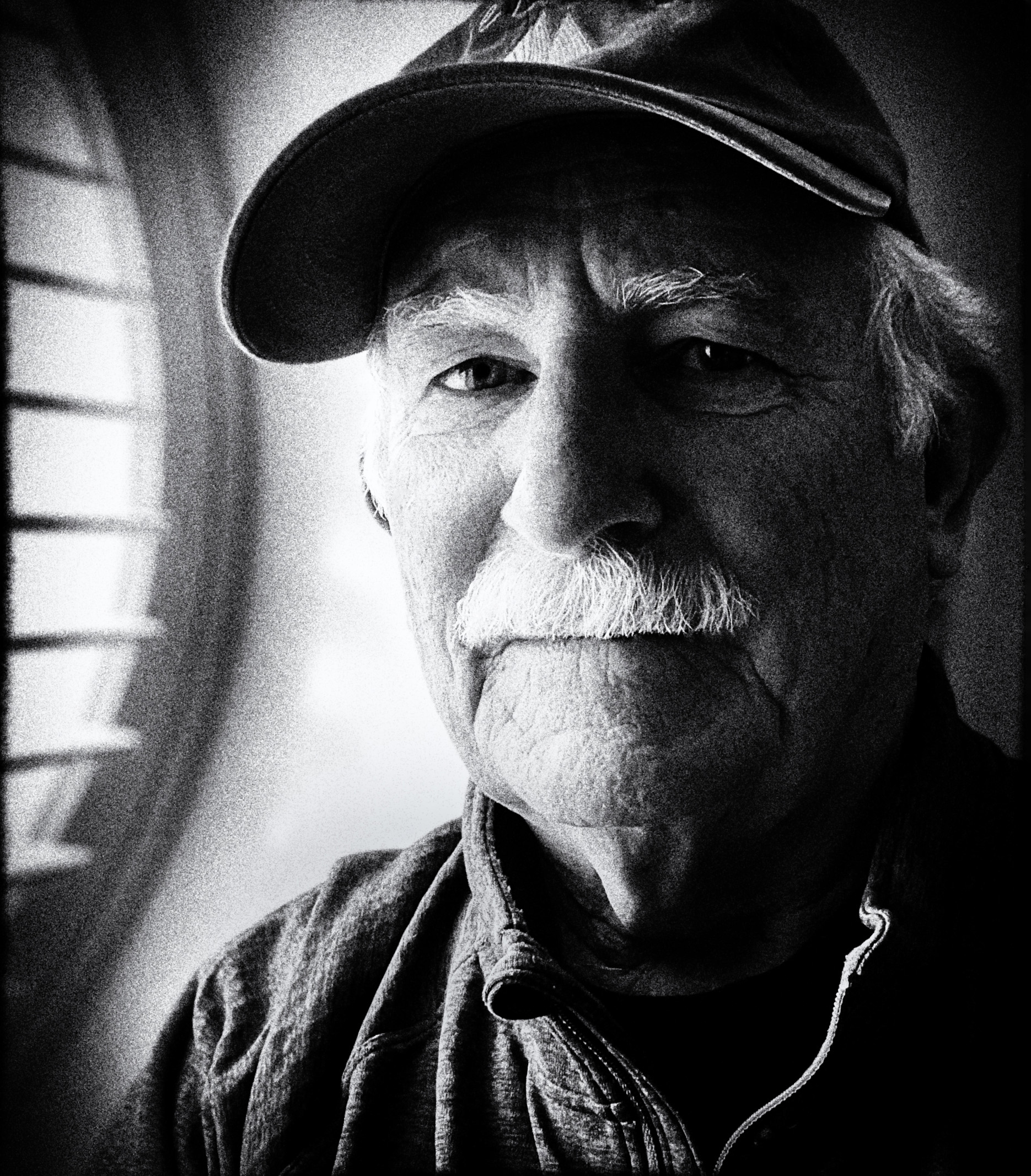 Jeff McGuiness is a photographer and writer who has lived in St. Michaels, Maryland for a quarter century. An avid boater, he enjoys exploring his beloved Chesapeake, divining the mysteries it holds.

McGuiness was born in California and grew up in suburban Washington, D.C. After graduating from college with an art degree in 1969, he spent the next four years in the U.S. Air Force as a photographer during the Vietnam conflict. He then worked as a commercial photographer in St. Louis for a time before deciding to pursue a law degree.

More information can be found at www.BayPhotographicWorks.com.

Say the words "Talbot County," and most people unfamiliar with the Eastern Shore of Maryland have no sense of where it is and what it looks like. Yet, without realizing it, millions of us share a common image of this rural tidewater area, one that comes from an improbable source.

4 North Washington Street Easton, MD 21601
410-562-3403
info@vintagebooksmd.com
This product is out of stock.
Product is not available in this quantity.

Enter your email below for notifications to any additions to this website.

You've been added to the list! We'll keep you updated.
Oops! Something went wrong while submitting the form.